And the day this occurred to me, I was accompanying my husband to the hospital on a Sunday morning, to get his foot checked after he had sustained an injury while playing cricket the previous evening.

I worked at the same hospital and while it helped to expedite his X-rays and consultation, I wasn't his doctor; I realised I was as vulnerable as I could be and for the first time, though I was in my ED scrubs, I stood by his side, as his wife. Yes, it's only been about 4.5 months since we officially signed up for life, to stand by each other through sickness and health and whoa! The first ordeal was here, "orredi"!

He was instead all calm on the outside, judging my Malay as I spoke in tid-bits to gather the story of my patient, whose trolley was bang opposite my husband's. My patient had no legs; he had lost them to diabetes. My husband had a probable foot fracture; he was put on a cast and he'd have to use crutches to move around. But he got out of the hospital, happy that he still had legs. (Yes, a few hours amidst patients can do that to one...)

And, I was back to work, till the end of my shift. Having to juggle personal and professional duties so closely wasn't something that I had done since the last time I took my dad to ED. It always makes me very vulnerable and I amn't too sure I even like it. Yet, as doctors,we have to attend to our duties; family vs professional - is always a tough call; and we learn to balance it all. Hiding our true emotions within, maintaining our poise and moving on...

That week, forced me to get out of my comfort zone and do things with extra thought; like keeping food packed in boxes so it would be easy for my husband to heat it for lunch. Each ordeal teaches you lessons. If not anything else, it taught me, there's always a way; and if you believe in yourself, you'll always find a way, come what may. Love is a beautiful thing, it lets you bloom. And this little incident just pushed me to be a better person, more giving, more considerate and more thoughtful!

More importantly, it taught me to always value the people around us. I began to realise those things that the husband did and I barely ever thanked him for it :P
Also, my husband was quite impressed by the quality of service rendered by the hospital nurses and allied staff; I extended my appreciation and respect to them :)

By the next weekend, the crutches were off and we managed to catch a movie with the gang after lovely Thai dinner; and were strolling by the Singapore river with a cousin sister who was visiting us. That was preceded by a lovely rainwashed afternoon atop the Marina Bay Sands, with a gorgeous view of the city below; amidst clouds.

A week I realised love can make you go the extra mile, and it's always worth it :)
A week that showed me that I amn't ever alone; when days are spent in gratitude, the Force gives you strength to face it all.
A week that reinforced the fact that change is constant. And embracing it, is all we have to do; for tomorrow, is going to be just awesome! :) 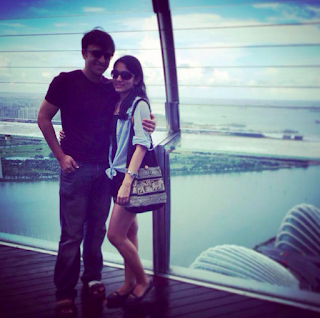 Posted by Dipti Kamath at 04:29 No comments: