The truth is I've not been as awesome a mother as I envisioned of myself. I honestly thought, I'd document more of you and store in forms that we could revisit at will. But I've been pressed for time, especially ever since I got back to work (nearly a year ago)- but no excuse is ever justified. So, this is me trying to make amends, if that were possible.

I realise it's been almost 9 months since my last blogpost but I've always harboured the itch to write - so here goes: My latest baby project :D I call it "AyuAfsaane" as a sequel to "The Miracle Series" - the latter chronicled my pregnancy journey through blogposts and with "AyuAfsaane" I intend to save in black and white, some tales from baby Ayaan's growing days, which I hold dear and hence, would like to cherish, years later, when he's all grown up and probably living in another country or planet, who knows?!

As of yesterday, Ayu, you turned 1.5 years old - 18 months i.e. - as parents, annoyingly for a lot of people, we remember our baby's age in months instead of years :D
To recap, we try and do fun stuff and take you out, as you grow a month older each month - not saying, we are boring parents on other days - but we particularly make efforts to do something that's fun for you and thus, we "make memories" every 26th. 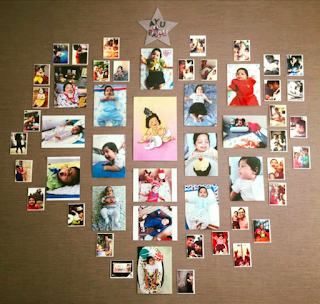 Like when you turned a month old, we were at the Immigration Office, on our first out of home trip, since your birth (barring our routine visit to the baby clinic of course) and later in the evening, we clicked snaps of you with the "happy birthday" helium filled balloon (from my birthday a couple of weeks earlier); when you were 3 months old, we were in Jakarta, chilling after our first overseas travel, with your maternal grandparents, before flying to Bali for the NYE and your dearest grandmother's 50th; at 5 months, we were in Alleppey, Kerala, to visit your great-grandmother - we have a rather gorgeous snap for the wall (which deservedly found its place in the annual family calendar) from that trip - followed which we headed to Pune for your Annaprashan ceremony, planned and executed by your paternal grandparents.
At 6 months, we visited the Aquarium with an aunt of yours (she was living with us at the time, thanks to her broken foot) - we also had a small
gathering at our condo function hall, with close friends in Singapore as a "play date" with a chubby little you - you got a lot of gifts expectedly, for some it was the first time they were meeting you (yea! You've had a rather busy schedule right since birth - haha!) but one that must be mentioned is from dear Mela aunty, who not only baked cupcakes but also got you an amazing hand-stitched sweater - in addition there was a personalised star with "Ayu Babu" spelt inside, from the Strathmore folks, which till date adorns your photowall, right at the top. 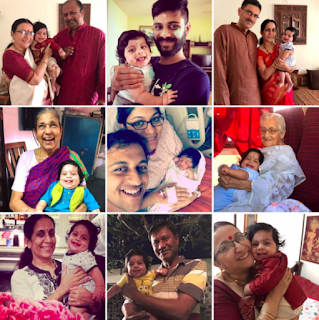 You turned 9 months old in Siem Reap, where we explored the temples, just the 3 of us on our second "three musketeer" trip (the first one being Goa). I was busy working on a very busy call duty in the hospital, the day you turned 11 months old, I got back late at night when you were already asleep but you didn't complain - to compensate and deal with my own guilt, I took you to your favourite splash zone that weekend. We rang in your 1st birthday, with our beautiful KaMazumian family, aboard a luxury houseboat, on the ever-so-serene backwaters of Alleppey, Kerala - prior to which we were holidaying together on floating cottages over Ashtamudi Lake.  Once, we were back in Singapore, we organized a "panda party" for our little panda-lover! There was a tiered panda cake, a lot of panda decor thanks to Etsy, including a Panda canvas with fun facts about you and "Pin Panda's Nose" game - and of course a lot of black and white balloons, panda party caps, panda plates, even tissue paper - we had little panda stuffed toys as part of the 'return gift' package - we contributed to the Panda Fund (under W.W.F.) under your name; but of course the celebration would have been incomplete, had we not visited the giant pandas, Jia Jia and Kai Kai, at the River Safari - albeit a few weeks later, around Christmas - after you had recovered from a bad flu bout.

As you turned 3x5 months old, we flocked together to visit your favourite feathery friends at the Jurong Bird Park; at 16, we had a ball at the play arena with thousands of balls; and then when you turned 18 months/1.5 years old, we visited the zoo, with your paternal grandparents and your great-grandmother as well - 4 generations at the zoo!

There's been cupcakes/home baked cakes/paayesh/pancakes/rasmalai what not to ring in the 26th each month - we've clearly added on a few inches to our hips, in the name of celebrating you - (ooops)

Every month, as you grow older and wiser - you teach and reteach us wonder, surrender and love, in its purest form.
In the last 1.5years since you first breathed and cried, there have been a few tears and laughter in abundance; we've found that our hearts are deeper than we've ever known; you've enriched our lives in ways you'll never know and may only hear about when you're older, if our memories don't fade... But having said that, we may forget the dates of when you first turned over or took your first steps - in the larger scheme of things, these milestone dates may not be as significant as the fact that you're showered with love and blessings - but we'll never forget how lucky we are to have you in our lives; So, until you let us, we'll love you to bits - we'll hold you close, sleep in on weekends, tickle you and cuddle long, play those games you love and read those books you've grown to associate with meal-time, repeatedly; and we'll click-click-click - pictures on our phones (10,000 and counting - thanks to the cloud!) and time-permitting (and if writers' block has been dealt with) on our keyboards, to document what an absolute wonder you are!

Thank you baby Ayaan, hamari Jaan, for the wonderful opportunity and privilege to be your parents and for joining us on this beautiful journey of life together. Let's continue to make cherishable memories... (now, I'll come and kiss you, while you slowly transition out of dreamland)

Posted by Dipti Kamath at 02:47 No comments: