The Miracle - Kicks and Tickles

About three weeks into my second trimester, the throwing up stopped. And I slowly started mustering the courage to step out of the house. Earlier, a 10minute stroll at the park of the HDB we stayed at, would make me dizzy, and I would scurry home to find respite over the toilet bowl. But now, I was managing to sit for an entire movie in the theatre (yes, I'd be prudent and take the aisle seat, just in case I felt uneasy).

And so, over time, it turned out to be the best trimester ever. I was able to eat whatever I pleased. Well sadly, I didn't really have any major cravings throughout my pregnancy. During my first, one evening I craved for momos - but by the time, the husband plated them for me; the craving went puff! 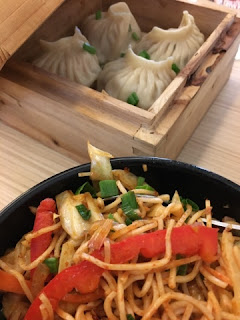 Oh I did want mangoes and ice-cream (like in Salaam Namastey) late one evening - so we walked down to the 24hour neighbourhood store and picked these up and devoured some while watching an episode of Game of Thrones.

Alright! You may judge me for the choice of series I was watching. I'd watch Criminal Minds and Code Black etc. And I would be chided for watching "negative" stuff. I'd say - I work in the ER and I see accident victims and "blood" - now do I have to change my job so it wouldn't influence my unborn baby?! Honestly, I would prefer positive suggestions like what I could watch instead. Anyways, for the positivity dose, I was happy and trippy, laughing loads, going out on dates with my husband, catching up with friends and having fun at work too. I listened to good music and ate loads of good food! 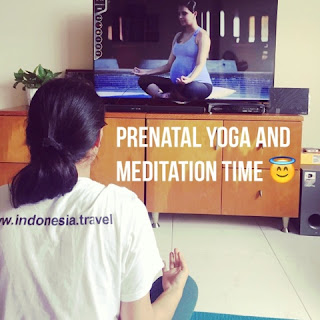 I even did some prenatal yoga with Lara Dutta and meditated to chants and guided meditations on the 'Art of Living' app. We even headed to the beach, and watched the sun set, while kids and dogs played around in the sand. Now baby, that's a fair bit of goodness don't you think? I didn't read you the 'Ramayana' or the 'Bible', but as you grow up, I intend to introduce you to the ever expanding universe of books - so initially we'll read you stories at bedtime and soon enough, you can read for yourself. Apologies if in the dark of the womb, the visuals you saw through my eye weren't necessarily pleasant, but well, welcome to the world little one - it isn't going to be all rosy alright - let's set our expectations right! (Rolls eyes)

Coming back, I had palpitations during my first trimester, so when they were pricking me for the sugar tests in the second trimester, I asked to test for my thyroid function too. Normal - phew! Oh and the glucose test, I had to drink up an ultra-sweet orange flavoured drink - I did and as expected, threw it all up within the next 10minutes. Sigh! - which meant I had to come some other day to re-do the test. Another off day to be spent in the hospital - damn! But alls well that ends well - A couple of weeks later, that came out normal too. Sometimes normal results can be such a relief I tell you! Walking day in day out amidst patients; normal seems uncommon! So I was glad the pregnancy so far was sans any complications :)

Which meant, we could still go on the long since planned family vacation with both sets of parents to Gold Coast, Australia! The excitement kicked in and my free time went in planning for the same. But more about that trip probably in another post, but for now let's just say, that was one fun-filled holiday and a well-deserved break, especially for Prantik and me!

I was 20 weeks just before the trip and I still wasn't convinced I was feeling any fetal movements. Maybe knowing too much isn't really good in this case - and can even make one paranoid! Obstetrics is a whole subject in our final year of medical school and as an intern, having run antenatal clinics, conducted deliveries over a 4 month period, half of which was in a rural set-up; I was well-versed with the changes in pregnancy, the various milestones in terms of weeks, complications, what to be cautious about in my diet, the entire process of labour etc - even though I did buy into the fad and get a copy of "What to Expect when you are Expecting" on my Kindle - I didn't really read it... Anyways, back to my unborn baby! I was worried as a parent even before I became one. But I tried to remain practical to allay my fears and anxieties so I placed the ultrasound probe on myself, one evening, after my shift. And I could see that the placenta was right in front and well, the little one's heart was beating at a good rate and rhythm (I recorded a small video clip of the same, for memory) and well, there it was - our miracle - floating in the liquor, flinging his/her limbs, "kicking" alright - I probably didn't feel much, as they were being insulated by the placenta bam in front!

And a few weeks later, I finally felt the little one move about, sometimes just a bit, as though teasingly tickling me and sometimes a flutter, oh so sweet! An effortless smile spreads on my fattening face and then nothing else matters - I know I've fallen, head over heels, in love with the little one - unborn, yet kicking alive, so close to my heart. The palpitations are because of the new love I know and when the little one kicks about in joy, my heart probably skips a beat! ❤️️ 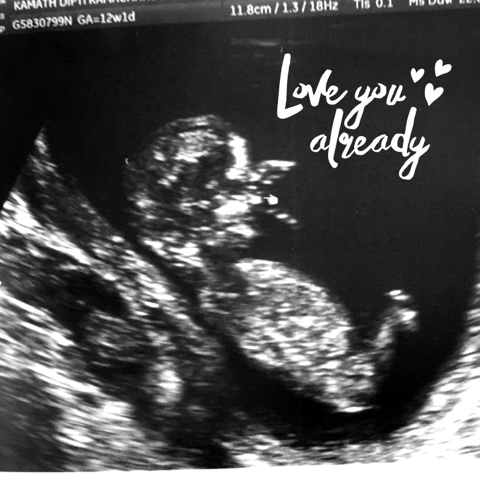 Posted by Dipti Kamath at 18:24 No comments: