Voyage of a lifetime

Over a couple months ago, I undertook a small voyage of sorts, with my husband, to visit his maternal grandma. Over 80 years of age, she is so gorgeous and beautiful, inside out. With a lifetime of experience backing her, she's seen her life transform literally from riches to rags and back up again. Her story has touches of royalty, disloyalty and everything else that one could possibly fathom. Yet, she remains rooted and is happy with herself; and has found her peace in this home, where other older people, like her, spend their days, in good cheer, together; some even breathing their last.

We flew from Singapore, spent the night in Kolkata, took the train to Berhampore, a cycle rickshaw till the banks of river Ganges, a boat ride across the holy river and finally lugged our bags, on foot, to reach that blessed home - Ananda Niketan. 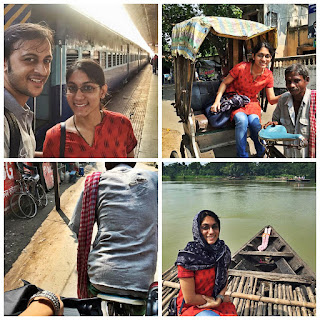 Grandma or Didun (Bengali term for maternal grandmother), was eagerly waiting at the doorsteps for our arrival. She showed us our room and then took us around, and introduced us to her friends, with utmost joy and pride, even! Last but not the least, she took us to her own room, which she has set up with much love; each corner has a memory, in the form of a photograph, in black and white or a souvenir from elsewhere; she has a prayer corner, a fridge, a TV even. She has a cupboard where she keeps the rest of her stuff, which with passing time, she aims to gift to someone or the other. She also has a whole packet of needles and woollen thread, which she uses to knit beautiful sweaters etc. for a new born infant in the village, rakhis and what not. She has an old Nokia phone (remember the one we could play 'Snake' on) but the network in her room is pretty much non-existent, so by the time she gets to the main corridor with better reception, the call gets disconnected, and she then waits to be called back... We got her a new touch phone, but she is way too attached to the old one, and she thinks 'old is gold', so she'd rather keep the old one itself, one that she is more familiar with. She doesn't really need much; this visit, all she asked for was a magnifying lens, to help her read better! (It's too cumbersome, to head to the opposite bank to get her eyes checked and get a new pair of reading glasses :( ) She was overjoyed, when she saw we indeed found her quite a nice piece of hand-held magnifying lens. 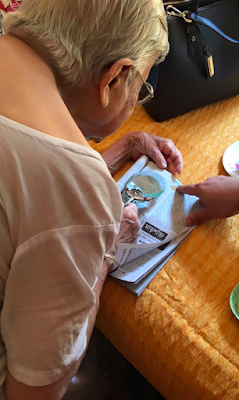 She's been there for years now, and being amongst the older people inhabiting that home, and also, thanks to her regal past, she's more like the queen in that palace of hers. She has a large heart and with her giving nature, there's no reason why she shouldn't be. There is a fixed menu each day, but she would ask them to cook special stuff as we're around. She has people from the village visiting her often, as well. Right from the village doctor, who's retired but offers his services by checking up on the old folks; the village school teachers who hold Didun in high respect; villagers who come to spend the evening there, sharing stories, life stories - most of these are sad yet true stories of young adults not having enough money for higher education, women helpers being beaten up by drunk husbands, families not being able to afford healthcare of a child born with deformities and what not. Didun helps out in whichever way she can. So today, that young adult is attending university; that woman is working at that very home, so she can be financially independent and take care of her children; that infant born with dangling upper limbs, is now a toddler, who plays with toys, with her own very hands, thanks to some pro bono work done by a hospital in Bangalore (plastic surgeons, I've had the privilege to work with as well! - Small world!) 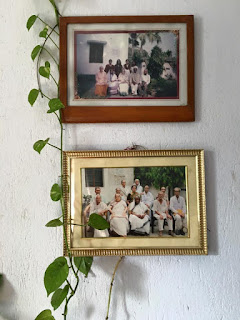 Didun was elated that I draped sarees while I was there; infact, I even wore one, which she had hand-embroidered, inspired by some Gujarati designs that she had liked from a calendar - she had patiently transferred the intricate designs onto a red saree, for her daughter's (my mother-in-law's) wedding, 35 years ago - and here, I was - blessed with the privilege to wrap it around and Didun couldn't stop herself from showing me and the saree off to anyone and everyone who crossed our paths :D Everyone definitely went "Khoob Mishti" ("Very sweet" in Bengali), in sincere admiration of the simple yet stunning work. And the fun fact is that, Didun can still be found engrossed in knitting and what not, under the broad daylight, right until the sun sets, for then twilight marks her television series time :P 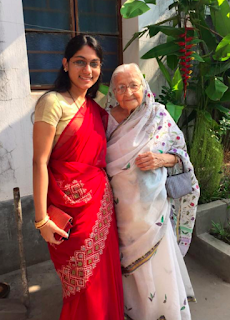 Didun also took us around the town. She took us the old temples, and even pandals that were being set up for the upcoming Durga Puja festival. She took us to archaeological heritage sites - the Hazarduaari Palace, Imambaras (mosques), cemeteries - where Nawabs and Begums lay; and also Dutch cemeteries! Lakes were a plenty and the stories that Didun shared from her childhood and of Murshidabad legends were delightful. They were as though right out of a history book - enchanting to say the least - I've always found tales of kings and ministers, and their many wives and battles - very interesting! 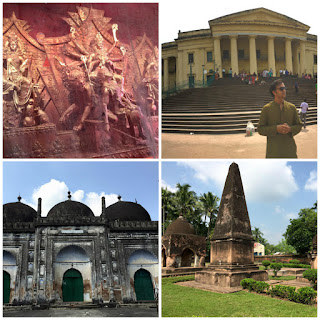 We also visited the site, where once upon a time, "sati pratha" was practised, right until early 19th century. Over two centuries ago, widowed women would voluntarily (or be coerced to) kill themselves, by jumping into the funeral pyres of their (dead) husbands. Raja Ram Mohan Roy championed the cause of banning the practice and soon enough, it was deemed illegal.
Time has been witness to many changes over its course, and though I began this blog retelling the wonderful things I got to experience and create cherishable memories around, it was to highlight the pretty much awesome time that a widowed, 80 year old woman is having at a place of her choice, a village town she considers home. Yes, she does have a son and daughter, who are both more than capable of looking after her (she is hale and hearty, and is sans any long term medications; she walks independently and does all her daily activities on her own, even today - so not like she really needs much looking after) but she prefers to stay in this peaceful, heavenly piece of land instead, away from the city noise and pollution. She prizes her freedom very significantly; she is at a place, where she can do as she pleases. More importantly, the village town brims with nostalgia for her and why should anyone be deprived of that, while going through what might essentially be the last stage of their lives. Though, years ago, I used to be very judgemental about "old age homes" and people who left their aging parents/grandparents there, this beautiful, heart-warming experience at Ananda Niketan had completely bowled me over. 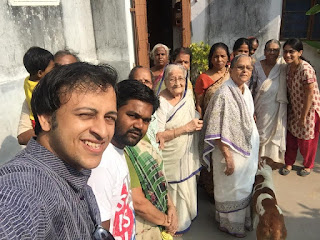 More power to homes like these, and the few people who work day in, day out, to help the old people living there. Thank you for looking after our Didun and keeping her happy. Special thanks to the watchguard dog, Bhola (shying away in the pic) who is so calm with the aged people, but can be quite a scare to strangers at the gate! Praying that they can all give each other good company, stay healthy and hearty; and that there shall be only peaceful smiles, when the sun sets... 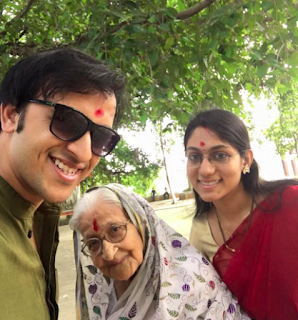